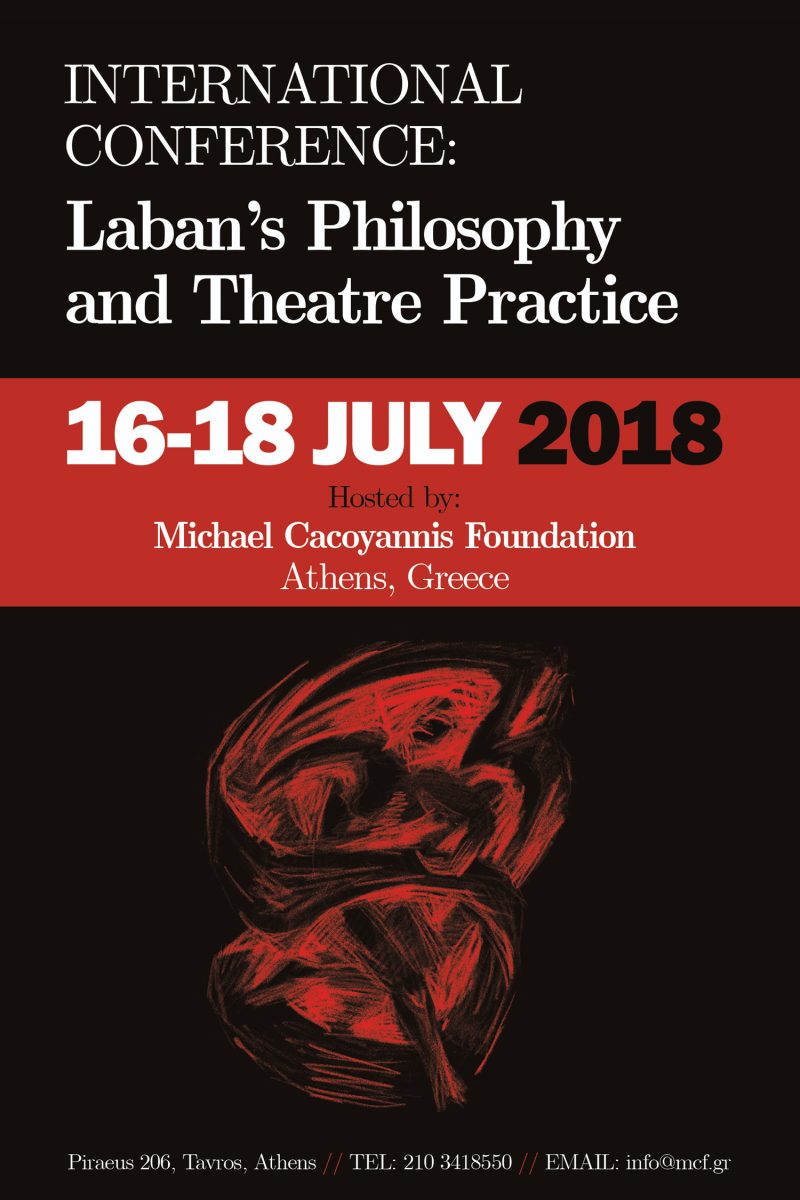 Post-doctoral Researcher Dr Kiki Selioni RCSSD, Labanarium and MCF have taken the initiative to organize a Labanarium event in Athens. The aim is to create an international event to meet colleagues, practitioners and researchers, to share experiences, knowledge and current research practices in the field of actor-training and performance practices.

Laban, in his book The Mastery of Movement on the Stage (1950) writes:

“It is obvious that the artist’s procedure in observing movements and analysing and practically applying his knowledge differs in several respects from that of the scientist. But a synthesis of scientific and artistic movement observation is highly desirable, for otherwise the movement-research of the artist is likely to become as specialised in one direction as that of the scientist in the other. Balanced effort can be created at both cases, but only when the scientist leans from the artist how to acquire the necessary sensitivity to the significance of movement, and when the artist learns from the scientist how to bring into his own visionary awareness of its inner meaning” Laban (1950: 107).

The connection between science and art is an issue that is stemming from the ancient Greek philosophy when art is considered to be a science; Poetic science. Poetic sciences which are the ‘know how’ in all professions that have to do with productive creation. This productive creation is completed in the product. What are examined are only the product and the way of its production (Aristotle 1993: 32). Tekhnê belongs to Poetic sciences since for ancient Greeks tekhnê is not an artistic creation, but technical skill. It has to do with certain dexterities which bear scientific validity and are based on knowledge. Aristotle believed that if an artist wishes to create a work of art, he should collect all available material on the subject and present them in a specific form. Thus, he starts from his general procedure when he examines a phenomenon; he first examines the reasons that produce a result. However, Aristotle considered that it was more important to conceive a specific form than to actually create it. He was mainly concerned with the katholou (Universal) and believed that in art the Universal is the act of becoming and the productive process that transubstantiates the informal into formal. Tekhnê, as science must be understood as based solidly on reason and therefore, it is necessary to possess knowledge of the use of its materials. According to Aristotle, the artist should not act through his uncontrolled inspiration or esoteric impulse. On the contrary, he should introduce order and objective laws creating a world per se.

As the basis for every science is logic and not an emotional state the question in the contemporary approach to actor training is in what way Laban’s words could be understood since the human being is considered as a complicated entity with all his aspects (physical, emotional, intellectual, and spiritual)?

You are welcome to send your abstract of 100 words for you oral presentation including title, institutional affiliation, and email address. In a word doc form to kiki.selioni@cssd.ac.uk by 30th April 2018.

The themes are, but not limited to:

Knowledge and intuition in the creation of the character
• Logic and emotion in acting
• Embodiment/kinesthetic awareness for acting training.
• Artistic creation and directing
• Technique and talent in acting
• Method and Methodology in acting
• Metaphysic and Characterization
• Acting on Screen

The workshops will have limited participants, up to 20. Attendants: up to 5