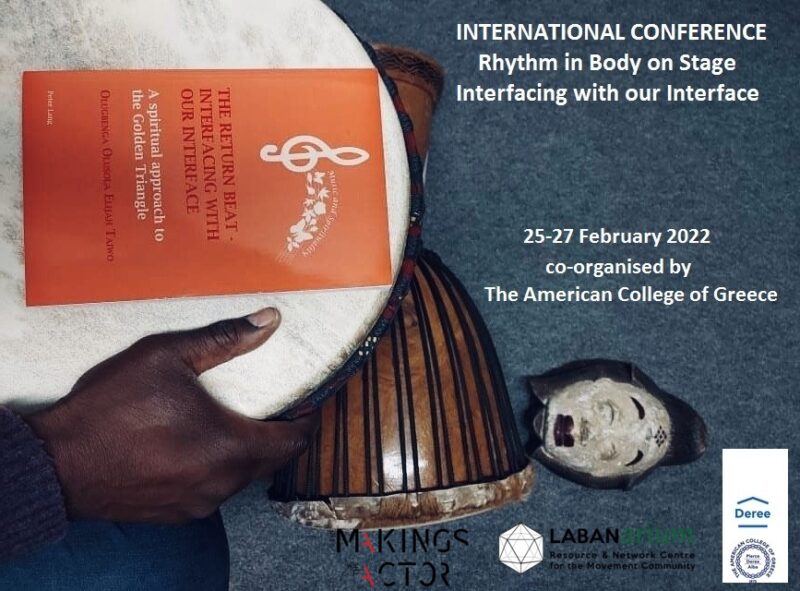 The Return Beat – Interfacing with Our Interface.

Rhythm in Acting Practice is an International Conference held under the auspices of The Makings of the Actor,  co-organized by the Theatre Arts and Dance Department of The Frances Rich School of Performing Arts-The American College of Greece, the Labanarium, organized by Dr Olu Taiwo , with the support of Post-doctoral Researcher Dr Kiki Selioni, Royal Central School of Speech and Drama, University of London.

The Makings of the Actor is organizing a series of conferences based on books from international research practitioners discussing in theory and presenting in practice their works. Practitioners’ books are always a difficult task due to the struggle they have transferring practice into the written form of a book. Although there is always the possibility of recorded documentation with regards to practical work however this is unsatisfactory for practitioners to present their work in a complete way. Current practices like webinars offers a better understanding but still there is no immediate communication that can offer debates, questions and finally exchange of knowledge.

This Conference is part of a series of international events under the aegis of The Makings of the Actor. The mission of The Makings of the Actor project is to gather international practitioners and researchers, from diverse fields of performance practice and scholarship, to develop and disseminate (through conferences and workshops) an evolving performance pedagogy that addresses the needs of present and future actors.

The Event will be held as a Blended (Hybrid) Conference

In recognition of both the global reach of this theme and the expansive network of interested practitioners and scholars, as well as the impact of the current pandemic, participants are invited to take part either in person or virtually. Conference proceedings will be live-streamed; papers, and where appropriate workshops and demonstrations, can be presented remotely.

Dr. Olu Taiwo in his book: The Return Beat- Interfacing with Our Interface, A Spiritual Approach to the Golden Triangle, coined the term Return Beat referring to a metaphysical experience of West African Rhythm, from a performer-centred approach. This approach draws attention to modes of rhythmic perceptions that highlights certain shared resonant experiences in a group that are cyclical in nature. The Golden triangle refers to the use of rhythm through: Song/spoken word, dance/movement, percussion/drumming. These perceptions are then used as a starting point to discuss individual and cultural practices of ‘being’, ‘becoming’ and ‘performance’ as part of a perception underpinned by a plethora of living forces on planet Earth. Principally, the Return Beat is a rhythmic paradigm that underpins the embodied knowledge of both Pan African people, in other words people who live on the African continent and people of the Pan African cultural Diaspora, who are people of African descent living outside the continent. This knowledge informs the creation and production of temporal space and underpinning its traditional fractal aesthetic. Fractal aesthetics is defined here, as an exponent of a binary fractal aesthetic that is underpinned by the bifurcation of a single pathway with regards to the agency concerning the life of biological systems. It observes the twinning process require for living being to propagate. To clarify, there is a distinction between ‘aesthetics’ and ‘agency’ with reference to the bifurcation of a single pathway.

The Return beat articulates a specific cultural experience of tempo and its flow within any given rhythm; which is the nature of the beat itself.The Return beat draws attention to the spaces between the beats as well as where the beats occur, as experienced by our physical journal.The concept of the Physical Journal advances a way of conceptualizing living bodies, from the perspective of a practitioner’s lived experience; thisbeing our lived, living and future body’s embodied knowledge and memory. The proposed concepts, underpinned by embodied memories both genetic and cultural, emerge from lived experiences informed by movements derived from a performer’s body in its process of change and development. These memories neurologically construct a kind of virtual body, which is holo-graphically projected as spatialized memory as the Physical Journal, helping living bodies to write and rewrite itself. The resonant embodied understanding of the Return Beat is experienced as a curve leading back to the individual’s sense of self, being and awareness. By echoing the metabolic circular rhythm of our heartbeat, we create an outgoing (centrifugal) and a returning (centripetal) experience pertaining to the duration between repetitive beats. These beats are perceived to emerge from visceralpathways in our embodied experience. Western assumption of repetition as being a static process in duration, subjugated the Yoruba perspective by ridiculing the transformative potential of repetition, reducing what is rhythmically repetitious to something which is unevolved and predictable. Through this lens, the concept of a Return Beat with notionsof returning to the same experience in distributed regions of space, can produceembodied fears of stagnation. However, if we move away from a static perception of temporal space, a perceptual hangover from dualism in the Enlightenment, to a more dynamic perception that includes the living body, then repetition does not unfold in stasis but inpulses and waves.

In light of this, the book explores how trans-cultural aleatoric performance practices that embody and explore rhythms withinthe performer’s physical journal (embodied memory and inter-cultural knowledge) within a given temporal space, can nurture an embodied ability to improvise with awide range of effort qualities and movement phrases. It postulates that performances produced with thisawareness will mean that the performer will have to be rhythmically intuitive with ahigh degree of self-co-ordinating intelligence.

Intercultural fragments are drawn from different cultural discourses that paradoxically co-exist independently with, as well asbeing fused and transformed by, each other. In addition to this rhythmic intelligence, we,as performing artists, can freestyle (improvise/invent) and choreograph within new interactiveand performative structures with the use of remote, interactive and informationtechnologies, to create and communicate new effort shades and performative relationships.

Taking The Return Beat – Interfacing with Our Interface as both a framework and provocation, this conference will delve into its various themes and practices, offering a platform for practitioner and scholars to share and reflect on their perspectives and insights into rhythm within acting and performance. Through presentations, work demonstrations and discussions, we will explore common themes as well as differing understandings and approaches to rhythm in this field.

Call for Papers, presentations and demonstrations

Using the chapters of the Return Beat as a framework for this conference, the themes and practices this event seeks to address include, but are not limited to:

Please send your submission by the 31st January 2022 to:
Kiki.Selioni@cssd.ac.uk and info@themakingsactor.com

If an official invitation is required earlier for research funding purposes, please contact
Kiki.Selioni@cssd.ac.uk and info@themakingsactor.com  and ensure that you submit your abstract as early as possible.

Paper presentations, teaching demonstrations, workshops will be held between 25 and 27 February 2022.

Conference Registration fees:
All those attending the conference will be given a discount code for ordering their own copy of Return Beat.

Embodied Reflections on Rhythm
Facilitated by Dr. Maira Milolidaki Soprano, performer, vocal and repertoire coach, speech pedagogue Frances Rich School of Fine and Performing Arts Deree – The American College of Greece
In this two-hour workshop we will be exploring the phenomenon of rhythm in its triune manifestation within a holistically embodied approach to performance practice: rhythmic patterns and motifs are shaped through the activation of our breathing, the projection of our voice and our ability to receive any text as an unlimited, imaginative soundscape.
Deree students will demonstrate their physical and vocal work process in order to map their response to a material of their choice.
A versatile and prominent soprano, Maira Milolidaki studied classical singing at the Athens Conservatoire. As a scholar of the Onassis Foundation, she pursued her vocal studies in Milan, Italy, and in Rome with Renata Scotto (Opera Studio, National Academy of Santa Cecilia). She has also studied theatre and the art of performance (Drama school Εmpros – Ergastiri).
As an active performer she offers a repertoire that ranges from baroque to modern. Her appearances in concerts and staged productions include the National Theater of Greece, the Greek National Opera, the Accademia di Santa Cecilia (Rome), the Teatro dal Verme (Milan), the Carnegie Hall (New York), the Theater Festival AndriyivskyFest in Kiev, the Athens and Epidaurus Festival, the Jazz Club Half Note. As a recording artist, she collaborates with the avant-garde electronic sound designer Constantine Skourlis, creating experimental music for internationally acclaimed theatre and dance performances. Human voice as a unified whole is her inspirational motivation. Over the years of practice, she keeps moving across disciplines, developing embodied voice research through advanced artistic projects; as a member of the Music Theatre Company Eutopia, she uses the solid grounding of her classical training to explore the dialogue of the singing voice with various art forms, engaging with new ways to encourage vocal improvisation within contemporary performances. She has been involved in vocal pedagogy for the last 15 years. Both her professional experience and the latest developments in voice studies are part of her teaching; she regularly participates in workshops and conferences that inform her methods, such as the Estill Voice Training and the Acting Method by Th. Terzopoulos. She has a PhD in semiotics from Sorbonne – Paris 4 and a Law degree from University of Athens.

Saturday and Sunday 17.00-20.00
*Please note, all the timings are based on local time in Athens, Greece.